(This is mostly a set of instructions for myself if I ever need to format my media PC, so I know how to fix it, but it turned into a short story that might help others as well)

I have a machine connected to my TV for playing movies, both from DVDs and from my file server, TV shows and everything else I might think of. Some time ago I acquired a remote for this machine, so I could control it all from my couch. And for some time, it was good. Until I rebooted the machine, and found that my remote was no longer working. Some experimenting, and I figured out that disconnecting the cable, and reconnecting it worked. And especially if I pressed buttons on the remote at the same time as reconnecting it.

I have no idea whether this was because of the hardware (either the serial receiver, or the PC), or something software-related. There were some issues with the serial port being grabbed before LIRC had a chance to start up. After I got my Mac mini and that took over as my desktop, I started shutting down this machine before going to bed, so having to do the reconnect-dance every day grew tiring really quick.

So I went out and bought a replacement.

I found a “THERMALTAKE Media LAB with remote, Black (A2331)”, which identified itself as “SoundGraph IMON VFD Device” when connected. It has, in addition to a IR receiver, a two line VFD-display with room for 16 characters on each line. 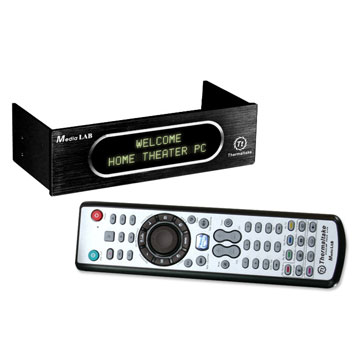 Getting the IR to work

I use Gentoo, and at the time of writing, LIRC 0.8.4 was the newest version in my tree, which did not work properly. Or I chose the wrong driver. Not really sure. I downloaded the latest 0.8.5 from lirc.org and compiled it. Selected “Soundgraph iMON PAD IR/VFD” from the USB devices setup.sh listed and it worked instantly. Modprobing the driver (lirc_imon) created both /dev/lirc0, /dev/lirc1, /dev/lcd0 and /dev/lcd1.

I have no idea what the difference between /dev/lcd0 and /dev/lcd1 is, since they both can be used to change what is displayed.

/dev/lirc0 and /dev/lirc1 however, have huge differences. Most of the interesting buttons come through lirc1, including Play, Eject, Fast-Forward, Rewind, Next Chapter and so on.

Then the mouse-related buttons, except the Mouse/Keyboard toggle button, and the number buttons come through lirc0. So to get everything working, we need two LIRC daemons running.

To use irrecord properly, we need a mode2 instance watching the other device, since the device maintains a buffer, and nothing new comes out of lirc0 if lirc1 has events waiting to be processed, and the other way around. My remote ended up with the following configurations

The toggle_bit_mask lines were originally something else, but I had to modify them a bit to prevent one event when pressing the button, and one when releasing it. Don’t remember where I found it, but it worked. Just randomly changing until only one event showed.

To get lircd running properly, I modified the init script from Gentoo, and had it start two of them, each with their own configuration:

After this, the remote part worked like a charm. Then, onto the display!

I tried running LCDproc first, which worked fine, but it seemed a bit overkill for my use, since I can just as easily write to /dev/lcd0 and have it displayed.

/dev/lcd0 gets created 0660, and owned by root:root, which means my user can’t write to it that easily. Instead of looking for a proper solution, I just stuck chown root:video /dev/lcd0 into my /etc/conf.d/local.start, which took care of it.